Encountered to Death is published!

And available for Kindle. Find it here: http://goo.gl/PsrXMZ

It seems Jamie Brodie can’t go anywhere any more without a body turning up. Jamie and his boyfriend Pete Ferguson are taking a week of vacation to visit Pete’s brother Steve in Alamogordo, New Mexico. They arrive to find that Alamogordo has been invaded – by fans of a TV show called Alien Visitors. The host of the show, Dixon Gill, was found dead in the lobby of Steve’s building. Gill’s fans believe he was killed by the FBI because he was about to reveal the truth about the government’s cover-up of alien visitations. Jamie and Pete know that’s not true. But who did kill Gill? The director of his show? A competitor on the same network? An angry commenter on Gill’s blog? A shadowy anti-government group? Or one of his ex-wives? The deeper Jamie probes into Gill’s past, the more potential suspects he finds.
The truth is out there – but can Jamie uncover it?

The cover for Encountered to Death

Encountered to Death, Jamie Brodie Mystery #5, will be published next week. Here’s the cover: 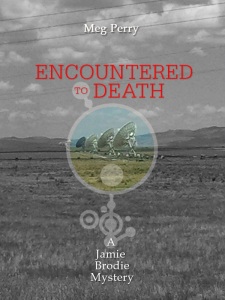